UK teens refuse to be silent about periods

‘I was angry I couldn’t even say the word’: UK teens refuse to be silent about periods

Girls have always been more likely to miss lessons than explain why. But that is changing

Molly Fenton, right, campaigning with her sister Tilly. Nearly six in 10 girls say they have been teased or experienced negative comments about their periods. Photograph: Harry Fenton

For most of her life, Molly Fenton had dreaded getting her period. Every month, the 17-year-old student at Llanishen high school in Cardiff would feel ashamed: uncomfortable, untouchable, unclean. “I couldn’t even say the word ‘period’ without feeling embarrassed,” she says.

She is not the only girl to have felt anxious about attending school when she was menstruating. A 2019 survey by the girls’ rights charity Plan International UK found that more than half of girls aged 14-21 have missed school because they are embarrassed or worried about being on their period.

Nearly six in 10 (57%) say they have experienced negative comments – being told periods were “dirty” or “disgusting”, being mocked for their perceived mood or behaviour while menstruating, or being teased about leaking and sanitary products.

As free sanitary products are set to be introduced to schools, teachers and students want to know: what is being done to tackle the stigma around periods in schools?

Not enough, says Kate Bowen-Viner, a senior associate at the Centre for Education and Youth thinktank. She has researched period stigma in schools and believes it is a major problem. “It underpins every experience girls have with menstruation. It acts as a gender barrier between boys and girls.” 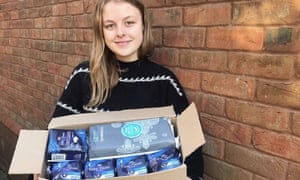 When she asked pupils why they had taken time off school while menstruating, many talked about fear and embarrassment rather than medical need. They also reported poor access to toilets and products at school.

“They spoke about smuggling tampons and pads to each other during lessons and feeling unable to put their hand up and ask a teacher if they could go to the toilet.”

Even at breaktime, pupils said they felt stressed about using toilets if the sound of a packet opening could be heard outside the cubicle. “If boys were stood outside the toilet, they worried about going in.”

Fenton’s attitude changed in March after she read a stirring interview with the 20-year-old period poverty campaigner Amika George. “I was so angry afterwards, mainly at myself for contributing to the period stigma in my school and in society in general.”

She decided to talk to her school’s senior leadership team. At the meeting, she handed out what appeared to be a box of Quality Street. “I will never forget that day,” says her headteacher, Sarah Parry. Instead of chocolates, the box contained sanitary products in a rainbow of colours. Parry says: “I’ve got quite a male-orientated senior leadership team … they all had to pick one. And then they didn’t know what to do with it. It was hilarious.”

After that, Fenton was given permission to talk about period poverty and stigma to all the year groups in her school. She launched a campaign, Love Your Period, online and in school and put posters up at school advertising classrooms where girls could get free sanitary products and spare uniform items.

Inspired by Fenton and wanting to set an example for boys in the school, a male member of the senior leadership team volunteered to give talks in assemblies to both boys and girls about the menstrual cycle and sanitary products. “He felt it would be very powerful for a male teacher to use the vocabulary [and] talk about the practicalities,” says Parry.

Parry thinks that, as a result, pupils are less anxious and embarrassed: “Girls have even said openly to male teachers in class, ‘sir, I really do need to go to the toilet, I’m on my period’.” Fenton has observed this increase in confidence too: “Loads of people have said: ‘now you’ve spoken about it, I’m going to speak about it.’” She has been contacted by schools around the world about her campaign through her Love your Period. 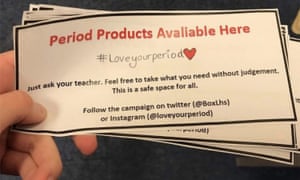 Parry says girls’ attendance has significantly increased since the campaign began and she is introducing changes to cement the impact Fenton has made. For example, she is installing floor-to-ceiling doors on the cubicles of new toilets with washbasins inside. “These may seem like small details, but they are important for the girls.”

Lori Fogle and Ellie Smith, both 15, students at Park View school in Tottenham, north London, also decided to take action. With the help of their maths teacher, Laura Katan, they created a workshop for younger girls about period poverty and stigma.

“By letting the year 7 girls talk about periods in the workshops and showing them they can be open and comfortable about it, we were letting them know there was nothing to be embarrassed about,” Smith says.

Katan says the workshop had a noticeable impact. “A lot of the year 7s were stressed by the idea that their period might start in school when they weren’t expecting it, and weren’t comfortable to speak about that, or deal with it. Loads of them said it was their first time talking about periods in such an open way. There was an atmosphere of relief.”

She plans permanently to incorporate a student-led workshop into the school’s curriculum. “I’m sure the reason the workshop was so successful at destigmatising periods was because it was peer-led by girls that the early years respected.

At Stirling high school, the principal pupil support teacher, Vicki Wilson, has set up a club of students, the “panda posse”, to remove period stigma. One student – typically a boy – puts on a panda head, while girls accompany him round the school giving out free sanitary products.

“Through making it a fun activity, the boys have learnt a lot,” says Wilson. “Using a panda puts a non-threatening face on it. We didn’t want our mascot to be a six-foot tampon.” Now 84% of girls at the school report feeling more comfortable talking about periods.

However, for Bowen-Viner, clubs and peer workshops will never be enough and she is calling on the government to tackle period stigma nationally in schools. “Teachers need to feel confident using language around menstruation – and to have the resources and knowledge to do that. And that is where training and support from policymakers is really important,” she says.

It's time for action 💪